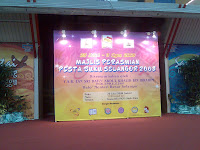 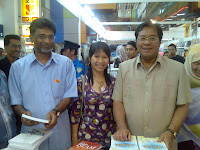 Me with the Minister of Selangor and Dr. Xavier 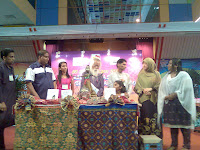 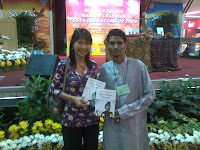 Me and Uthaya Sankar SB, author of Rudra Avatara-A Collection of Short Stories in Bahasa Malaysia. It comes in two versions: soft cover costs RM20.00 while the hard cover is RM40.00.

For further information on this new book, kindly visit http://www.uthayasb.cjb.net/ 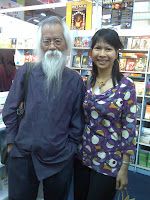 Me and Dato’ A. Samad Said, the National Laureate 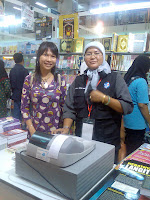 Helping Kak Rozilah of Farana Books Resources at her booth,
which represents PTS Publications and Al-Hidayah
at 7/26/2008 1 comment:

The One Day Thai Cookery Workshop

This cooking class provides a good opportunity to understand more of Thai culture and the Thai way of living and eating. Each workshop will take you through all the steps required in preparing 5 main dishes plus 1 dessert. Learn about Thai herbs and ingredients as well as substitutions you can use back home. After a brief introduction to the concept of Thai cuisine, a short excursion to the nearby Thewet market to shop for fresh ingredients precedes the hands-on cooking experience. This cookery class is not just a demonstration of how to cook by the Thai chef you will actually do the cooking yourself!

A coffee break is provided during the morning and once all the cooking is complete you all get to sample the creations you have made together over lunch.

The One Day Cook Workshop costs at 1,200 Baht per person. Minimum 6 people with maximum of 10 people.


For more info on workshops conducted by SPAFA kindly visit http://www.seameo-spafa.org
at 7/09/2008 1 comment:

Prime Minister Hun Sen said that "it is a new pride for the Cambodian people as well as peoples in the world that the Preah Vihear Temple is recognized as top Khmer architecture and it has a universal values for the humanities."

"I would like to express my profound and honest thanks to all the people at all levels that always supported the government's work and expressed their understanding and patience to protect the national interests and make peace with the Thais as good friend and neighboring country," he said.

The Preah Vihear Temple is the third Khmer heritage listed as world heritage, after the Angkor Wat Temple in 1992 and the royal ballet style in 2003, he added.

Sok An, Deputy Prime Minister and Minister of Council of Ministers, said that the Cambodian-Thai ties won't be affected by the listing.

"Though Cambodia and Thailand may have had some differences of views regarding the listing of the temple, this issue has not in any way affected the long-standing ties of friendship and co-operation between our two kingdoms and peoples," he said.

The Cambodian government has a long-standing position that "the inscription of the temple will not affect nor prejudice the rights of Cambodia and Thailand on the demarcation work of the Joint Commission for Land Boundary of the two countries," he added.

Hor Namhong, Deputy Prime Minister and Minister of Foreign Affairs and International Cooperation, said that "the listing of the Preah Vihear Temple is the success of civilization and culture for the Khmer people."

The success didn't break the relationship and cooperation between Cambodia and Thailand, even as Thailand canceled the joint communique on the Preah Vihear Temple issues, he said.

Thailand didn't lose a centimeter of land to Cambodia and Cambodia didn't lose either for listing the Preah Vihear Temple, he said, adding that both sides have plan to plant demarcation posts in accordance with the border and geographic lines specified in bilateral treaty.

Meoung Son, president of the Khmer Civilization Fund, said that he will build a museum at 20,000 U.S. dollars for the Preah VihearTemple.

He appealed Thailand to hand over artifacts of the Preah Vihear Temple to the museum.

"The temple will become a potential tourist destination," he added.

Earlier Tuesday morning in Quebec, Canada, all the 21 members of the World Heritage Committee during its 32nd session unanimously approved the Cambodian application to list the temple as World Heritage Site.

The site of the building, which lies along the disputed Thai-Cambodian border, has long been a point of contention between the two Asian neighbors, Cambodia and Thailand.

Cambodia started seeking the status of World Heritage Site for the temple in 2001, hoping for influx of tourists and international funding that normally accompanies the designation.

But Thailand has vetoed its neighbor's submissions amid fears the status would include disputed land along the border.

In May, Thai Prime Minister Samak Sundaravej's government bypassed the Parliament and endorsed Cambodia's application. Thai critics have accused him of violating the country's sovereignty, and the government withdrew its support late last month.

Fortunately for Cambodia, last minute efforts by the Thai delegation to delay the vote and to have joint management of the temple failed at Tuesday's session of the World Heritage Committee.

Last week, Cambodia shut up the gate at the temple after Thais conducted demonstration around. It also deployed police at the Thai Embassy in Phnom Penh fearing that possible anti-Thai parade there.

Back to 1962, the International Court of Justice awarded the temple and the land it occupies to Cambodia, a decision that therefore rankles Thais.

Places I've been to 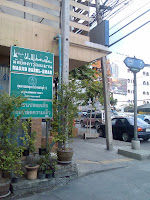 Yesterday we had lunch at Ibrahim's Shop, situated at No. 455, Petchaburi Road, Soi 7 (Soi Sulao), Bangkok. It's two doors away from the Darul Aman Mosque. We were served by the owner's daughter who speaks English well. Besides being able to speak English well (phut phasa ungkrit kheng), she cooks well, too. We had a good lunch which cost us 210baht only. We had three servings of rice (khao), pla sam rod, khung sai setor, a bottle of water and a complimentary plate of deep fried cow's tongue (lin). Keiron said no wonder he likes to eat tongue very much as my name means tongue in phasa Thai..he,he,he 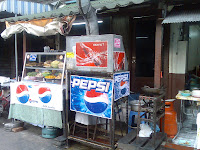 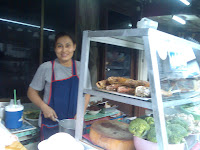 Sarina, the daughter of Ibrahim, who's also the chef. 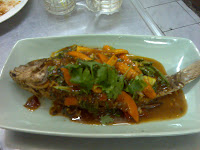 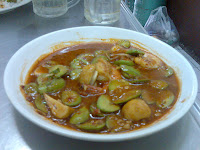 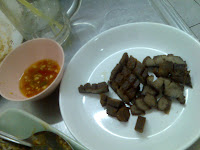 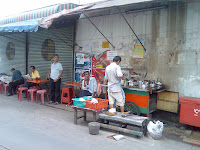 This road side vendor serves very delicious cha yen and toast.
There are many Muslim eateries along this soi (lane).

Lunch with Emily from Room to Grow 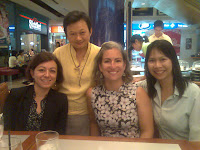 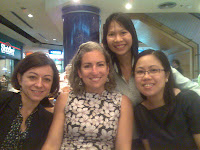 From left: Agness, Emily, Lynn & Abigail. Tiraporn is in yellow.
We had a good time having lunch and sharing ideas with Emily, the Global Program Officer of Room to Grow on last Monday, 30 June 2008. For further info on Room to Grow, kindly visit http://www.roomtoread.org
at 7/06/2008 1 comment: 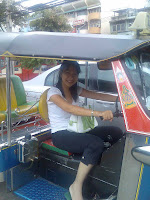 Hey...look who's the lady tuk-tuk driver with her white and green(si keaw) bag in which she placed her collection. She has resorted to driving tuk-tuk after the price of petrol in Thailand was raised to 42.79baht...he,he,he.

Talking about the price of petrol over here, it's much more expensive compared to the price in Malaysia. The car I drive consumes about 1600baht of petrol per week besides the 40baht toll per trip for me to get to my office which is only about 20km(yi sip kilomet) in distance. It takes me about an hour(neung she mong) to get to office while Keiron takes about 30minutes(sam sip nathi)to his office which is about 40km(si sip kilomet) away from home. This is because my office is right in the middle of Bangkok town, along the Sukhumvit Road while Keiron's is in the province of Ayutthaya. I go downtown while he goes up north of Bangkok. We take the same expressway but towards opposite directions. In the evening, I'd leave the office earlier than him but he would reach home before me... It would be better for me to take the underground and sky train but I wouldn't want to be caught in the rain since it's rainy season now in Bangkok. 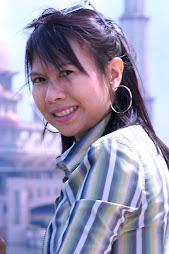 LYNN
Sawatdiikha and Assalamualaikum wbt. Welcome to my wonderland. I feel great whenever I'm able to be of help to anyone at all. If you have any queries about anything at all which is not provided in this blog, feel free to drop me a line at zlynn17@gmail.com. Have a lovely time extracting info needed from here, yeah. Khop khun kha.